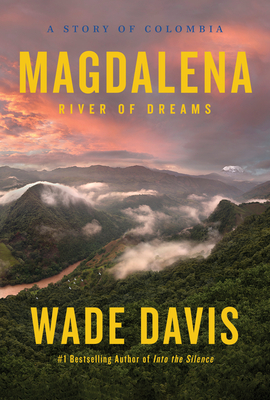 A captivating new book from Wade Davis--renowned, award-winning, bestselling author and photographer, and National Geographic Explorer-in-Residence for more than a decade-- that brings vividly to life the story of the great Río Magdalena, illuminating Colombia's complex past, present, and future in the process

The Magdalena River is the lifeline that runs the length of the nation. For centuries, it allowed Colombians to settle their mountainous, geographically unique region--one of the most challenging on the planet. Colombia's complicated history reflects the beautiful, wild and impossible geography of its largest river: in places, it is placid and calm; in other moments, tortured and unpredictable. A cultural wellspring of music, poetry and literature, in dark times the Magdalena also served as the nation's graveyard. As the country enters a momentous period of revitalization, Wade Davis explores the three major sections of the river, alto, medio, and bajo, evoking each singular landscape and the people he meets there in poetic, nuanced writing, accompanied by his own striking photography.

At once an absorbing adventure and an inspiring story of hope and redemption, Magdalena gives us a rare, kaleidoscopic picture of the past and present of a nation often reduced to unfair clichés of drug cartels and violence. Through many years of uncertainty, however, the Magdalena never abandoned its people, always returning as a life-giving force, the source of much of Colombia's wealth--and its dreams.

Seamlessly weaving together memoir, history, and a remarkable tale of a nation rising to bring about transformational change, Wade Davis tells the story of this magnificent river with passion and love, and in doing so, tells the epic story of Colombia.