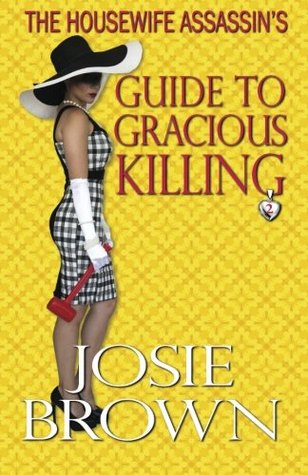 In Book 2 of THE HOUSEWIFE ASSASSIN series,a nuclear arms summit hosted by a politically-connected American billionaire industrialist provides the perfect opportunity for a rogue operative to assassinate of the newly-elected Russian president on US soil. Acme operative Donna Stone's mission: seek and exterminate, before all hell--and World War III--break loose. But first things first: file for divorce!

Read an excerpt at HousewifeAssassinsHandbook.com

PRAISE FOR THE HOUSEWIFE ASSASSIN SERIES:

"This is a super sexy and fun read that you shouldn't miss! How do I love this book, let me count the ways: (1.) A kick ass woman that can literally kick ass as well as cook and clean. Donna gives a whole new meaning to "taking out the trash". (2.) The book is set around Los Angeles, mostly in a gated community suspiciously like Coto de Caza, full of housewives that could be 'real" and for the setting alone, a big giant WIN! (3.) Super sarcasm, snarky dialogue and making fun of all that is wrong in the OC, politics, as well as current world affairs." -- Mary Jacobs, Book Hounds Reviews

"If I was a housewife, I would want to be Donna. I'm not kidding guys, the girl can shoot, seduce, and kill, all while balancing the demands of carpool and managing the suburban mommies and their opinion of her and her kids. Her hostess skills are to die for, and many have fallen for her seduction routines. Enter Jack, who is a fantastic and well known agent, and sexy to boot. The chemistry between the two of them is enough to set water on fire. Add in a healthy dose of humor and ridiculousness, some mayhem, and some really cute kids, and you've got a book that won't be put down - so go pick it up now!"
-- Cat's Thoughts

"The Housewife Assassin's Handbook by Josie Brown is a fun, sexy and intriguing mystery. Donna Stone is a great heroine - housewives can lead all sorts of double lives, but as an assassin? Who would have seen that one coming? Certainly not those in Donna's neighbourhood. This book totally reminded me of the movie Mr & Mrs. Smith. Not that it is a copy of the movie, but that it has all of the thrills and enjoyment of the movie. It's a fast-paced read, the gadgets are awesome, and I could just picture Donna fighting off Russian gangsters and skinheads all the while having a pie at home cooling on the windowsill. As a housewife myself, this book was a fantastic escape that had me dreaming "if only" the whole way through. The book doesn't take itself too seriously, which makes for the perfect combination of mystery and humour..." --Curled Up with a Good Book and a Cup of Tea

"I thoroughly enjoyed Donna and Jack, their zeal for their missions and each other. James Bond doesn’t have anything on these two. Very entertaining." -- Sandy M., The Good, The Bad, and The Unread

"After reading this fantastic story, I immediately checked out Ms. Brown’s website to see what else she has written. I was so excited to see there is another The Housewife Assassin’s book!! I will be reading it next. I am in love with the main characters. And what an interesting twist at the end." -- Guilty Pleasures Book Reviews

The Dead Room Pacey Packer, Unicorn Tracker Going Home The Safety Match Deep as the Rivers Desired This Won't Scale: 41 Plays From The Drift Marketing Team To Help Your Business Cut Through The Noise, Grow Faster Than The Competition & Thrill Your Customers Come Away with Me Fire Of Motivation : Inpiration From Youth Icon Of India - Sandeep Maheshwari The Paris Diaries, 1941-1944