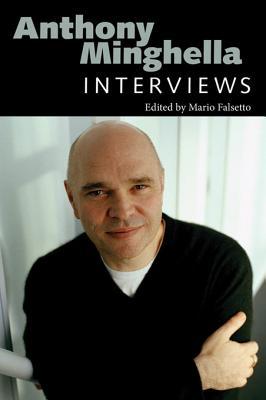 Anthony Minghella: Interviews is an illuminating anthology of in-depth conversations with this important contemporary film director and producer. The collection explores Minghella's ideas on every aspect of the cinematic creative process including screenwriting, acting, editing, the use of music in film, and other topics concerning the role of the film director.

Minghella (1954-2008) was a highly regarded British playwright (Made in Bangkok), and television writer (Inspector Morse) before turning to film directing with his quirky, highly regarded first film, Truly, Madly, Deeply, in 1990. He went on to direct an extraordinary trilogy of large-scale films, all adapted from significant works of contemporary literature. Minghella's 1996 adaptation of Michael Ondaatje's poetic novel The English Patient was the director's most critically and commercially successful film and went on to win dozens of awards around the world, including nine academy awards. Minghella followed this film with his entertaining, elegant adaptation of Patricia Highsmith's The Talented Mr. Ripley, a film that enjoyed great critical and commercial success and featured some of the best acting of the 1990s by its talented cast of young, rising stars, Jude Law, Matt Damon, Gwyneth Paltrow, and Philip Seymour Hoffman. Minghella's ambitious adaptation of Charles Frazier's American Civil War romance, Cold Mountain, was released in 2003, and firmly marked Minghella as a director of intimate, yet large-scale epic cinema worthy of David Lean.Although Minghella was a successful film director and producer, he was also an important part of the cultural life of the U.K. He was awarded a CBE (Commander of the British Empire) in 2001 for his contributions to culture, and he was Chairman of the Board of Governors of the British Film institute from 2004 to 2007.

Deep as the Rivers Come Away with Me Germinal Wonder Plants: Your Urban Jungle Interior The Religious Affections Değişim Sürecinde Türkiye: Osmanlı'dan Cumhuriyet'e Sosyo-Ekonomik Bir Değerlendirme Fruits Basket Another, Vol. 3 This Is Shakespeare The Road Not Taken and Other Poems Rebel Rising